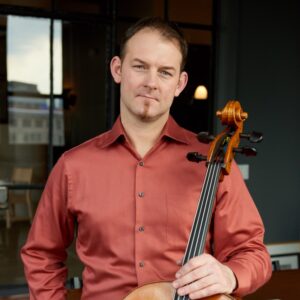 Mr. West has been Director of Orchestras and String Studies at Celia Cruz Bronx High School of Music since 2005. He completed his Bachelor’s in Music Education at NYU and Master’s in Cello Performance at Queens College. The string program at CC hosts three orchestras to suit all players’ current facilities. In addition to performing concerts throughout the city, Celia Cruz string students receive consistently high marks both as ensembles and soloists at numerous annual events including NYSSMA and Music Showcase Festivals.

In addition to the orchestra program, Mr. West is an advocate of small ensemble work. He directs the after-school chamber music program and rock band and produces an annual recital series each Spring.

Mr West enjoys the power of music to touch each person differently and explores that through his performance and teaching.