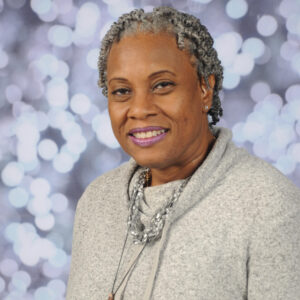 There was never a doubt that music would be a big part in Jackie’s life. She comes from a large family of gifted musicians. Many of whom have performed professionally their entire lives.

Starting voice and piano lessons at the age of 4, Jackie would later attend New York’s acclaimed Music and Art High School now known as (LaGuardia). After graduation she attended St. Johns University and accepted a scholarship from the school choir and received a BS in Health Care Administration with a minor in Business.

As a member The Repertory Theater Company in St. Thomas USVI Jackie performed in Camelot and Phantom of the Opera. She also performed in a production of Ain’t Misbehavin’ with the Pistarkle Theater Company also in St. Thomas. Jackie has been a soloist and member of the St. Johns University Concert Choir, SDA Deo Gloria Chorale in St Maarten, The UVI Concert Choir in St Thomas and The Lehman College Choir – CUNY

Jackie is a founding member of the professional singing group “Las Tres Amigas” and later the Calypso band “Pyour Passion” which traveled and opened for such acts as Shaggy, Sean Paul, Kassav, Destra, Allison Hinds, as well as world renowned Calypso legends Arrow, Byron Lee, and The Mighty Sparrow.

Ms. Bergland has a second Bachelors Degree in Music Education from Lehman College and holds Masters Degrees in Early Childhood Education and Special Education, both from the University of the Virgin Islands as well as a MAT in Music Education from Lehman College. She studied voice with; Louis Sgarro from the Metropolitan Opera, Gary Glaze of the NYC Opera, Dr. Vertrelle Mickens from Kentucky State University and studied the McClosky Vocal Approach under Dr. Bonnie Pomfret.

Jackie has been Choir Director at Celia Cruz Bronx High School of Music for 8 years. She teaches Freshman Mixed Voices Chorale, Intermediate Mixed Voices Choir, Men’s Choir and Advanced Women’s Choir. The choirs participate in NYSSMA each year and the Women’s Choir has earned 2 gold with distinction awards during their 7 years of existence. The Women’s Choir has also won the Six Flags Music Showcase Festival Grand Sweepstakes Award in Chorus. In addition several of her students have been selected to the New York State School Music Association All State Choir.

Jackie started her teaching career in the Virgin Islands teaching special education students before transitioning to music. She has been an adjunct professor of music at the University of the Virgin Islands teaching applied music-voice. She also taught music theory, class piano, ear training, music appreciation and applied music-voice at Lehman College – CUNY.

Describing Jackie’s teaching style, students not only learn music theory and musicianship, but they also learn important life skills such as self-discipline respect and self-confidence. They are taught the benefits of staying committed to a long term goal as well as accountability and responsibility for ones actions.

Jackie being a mother herself credits her parents with helping her to stay focused, and a strong upbringing in the church for providing her with the tools she needed to flourish.

Ms. Bergland has now been teaching for over 20 years.